Creating a New Story for Law 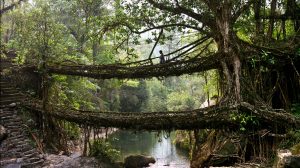 As our insight into the radical interconnectedness of all life grows, it is impossible to ignore the colossal failure of our current legal and governance systems to support and maintain a healthy, habitable planet. We have sought to increase human wellbeing (or rather – the wellbeing of a relative minority of humans) at the expense of climate, water sources, forests, fauna, flora and a large proportion of our own species.

As Helena Norberg-Hodge points out in her influential film, The Economics of Happiness, which sets the record straight on many environmental and economic myths, “We are facing an ecological crisis, an economic crisis and a crisis of the human spirit”. And in his recent essay, A New Story for a New Economy, David Korten talks about the three familiar creation stories that have guided us to where we are now, and which, as we enter the 21st century, have proven to be inadequate to the task. He talks in terms that will be familiar to many of you by now, of the need for a new “Living Universe” story to replace the “Distant Patriarch”, “Grand Machine” and “Mystical Unity” stories which have governed our understanding of the world to date. What if we were to live by the “Original Instructions”, for example by reflecting in the design of our social and economic systems the underlying principles uncovered by systems biologists – “that the healthy function of any living system depends on highly complex and sophisticated forms of collaboration. Most all living organisms exist, thrive, and coevolve only within living communities engaged in continuous synergistic sharing and exchange that, from a big-picture perspective, is fundamentally cooperative”. Meanwhile, our economic system and the law and governance systems that underpin it continue to support competitive practices and forms of corporate ownership that benefit the few rather than the many. Together with an underlying assumption of unfettered growth on a finite planet this forms the basic, state-sanctioned “story” for ensuring human progress… Not very smart.

It is clear that throughout time humans have been guided by stories. Our stories shape us, inspire us and bring meaning to our lives. What happens when it becomes clear that a prevailing story is no longer serving us? Simple. We write a new story! One that fits the full knowledge and understanding of our time. No pressure then! So what IS the new story for law and governance?

In just under a month, a catalysing event will take place at the Findhorn Foundation in Scotland – the New Story Summit, at which will gather 350 bright and committed individuals from around the world. In the organisers’ own words: “The Summit is designed to support the emergence of a coherent new story for humanity and to produce practical, collaborative ways to live this new story”. So what is the coherent story for law and governance, and how do our new stories for law and governance meld with the new stories emerging in ecology, economy, politics, culture, community building… In short, the new story of human life on Earth?

It seems increasingly obvious that a key element of this new story is the need to embrace a paradigm of unity rather than separation, in other words – the way that spiritual teachers have drawn attention to for millenia. This will undoubtedly require a growing level of spiritual maturity, as we are called to embrace a culture of “us” rather than “I”, as we live and breathe the gift that is life.

And yet we cannot ignore the “I”. We are all conditioned by our experiences of the social and cultural systems that we are born into, deeply flawed as they may currently be, and epigenetics shows us that we carry information and energy from our ancestors in ways that we do not yet fully understand. That each of us needs to engage in a personal journey of healing – of embracing all of who we are (warts and all) – is beyond doubt. This is because every time we suppress a feeling or instinct in ourselves for whatever reason, we will in turn experience these suppressed feelings as faults or “wrongness” in others – and that leads to a culture of blame and misunderstanding.

From my lived experience of human systems I believe that if we ignore the “I” – for example by thinking that the immense and urgent tasks facing humanity make it OK to marginalise the human relationships that confront us every day – we do this ultimately at the expense of the “we”. So for me, part of the New Story of Law is a re-imagining of lawyers – as the healers of the woes of their community. Lawyers need to have the maturity to show up as complete human beings, that is, mature enough to deal not only with facts and procedure, but also with the difficult emotions that arise during conflict and disagreement. Their role then is to facilitate resolution, so that we can move beyond the adversarial system that only adds petrol to the fire.

Of course, many Earth Law Alliance members are already engaged in developing and advocating for new stories of law and governance. Almost inevitably, by virtue of choosing a particular area to focus on, it is easy for us to become entrenched in our own “legal silos”, thinking that “my way is the right way” or the only way and thus, we end up creating more of the separation that we are seeking to heal.

So one of the main purposes of the Earth Law Alliance is to create a forum for alternative ideas to be acknowledged, discussed and developed. We have members who speak out for the recognition of the inherent rights of nature, as recognised in the Universal Declaration of the Rights of Mother Earth and as advocated by the Global Alliance for the Rights of Nature; members who want stronger laws to prevent destruction and damage to the Earth and all its inhabitants, such as we see in the Eradicating Ecocide initiative. Some members are developing methodologies and practical tools for ecological governance, such as Prof Klaus Bosselmann’s work on Global Ecological Integrity. There is also the Universal Covenant Affirming a Human Right to Commons and Rights-based Governance of Earth’s Natural Wealth and Resources, as proposed by Burns H Weston and David Bollier in their book Green Governance, and Community Ecological Governance methodologies developed by Gaia Foundation. In the wider field of law and governance, we see alternative means of resolving disputes, such as in the Restorative Justice movement, new ways of practising law, as proposed and developed by the Integrative Law Movement, which advocates for lawyers to be healers and peacemakers, as well as best practice policies being advocated by the World Future Council and its Global Policy Action Plan, which offers best policy solutions for a sustainable future. So many compelling, potentially world-changing initiatives are springing forth – the ones I have named above are but a few.

So what do we need to do to redress the current profound imbalance between humankind and the rest of nature? Is it to overturn, through new laws and governance systems, the sense of entitlement that corporations assume when they treat the Earth as a source of endless “natural resources” for the fabrication of a multitude of products that humans don’t really need? Do we need to transcend our human-made concept of the supremacy of the nation state, in order to find an equitable and climate-safe way forward as we face a future of dwindling energy from fossil fuels? Do we need to reimagine the concept of human “ownership” of land? Establish ways to ensure that the integrity of ecosystems and other species are considered every time we make decisions that impact Earth? Do we need to rethink how we resolve disputes? Or how we treat those who transgress? As a species, we have made so many assumptions and collective agreements that do not serve the whole… What is the best way forward?

With gratitude and warm regards,

The photograph above, reproduced with kind permission of Amos Chapple, shows a bridge made from living rubber trees, in the state of Meghalaya, India. To see more of Amos Chapple’s beautiful “living bridge” photographs, click here.